SUNSHINE AND A GREY DAY!

Woke to a beautiful sunny morning with clear skies which was to last all day - and warm too. All the girls came up for their breakfast except Bettina, who was on her own in the shelter field and everyone else had moved into the Holly field... mmm.  Sure enough she began, this was going to be exciting as being a black girl we had a bit of an experiment to see if we could get a grey or maybe a black with Royal Vision, given the colour in his background. Did it work - well no as a very white looking bulge started to emerge from under her tail. With just tiny bit of assistance with a stuck elbow she gave birth to a very fluffy and rather whacky white female with a pale fawn topknot and ears - not grey then. We have called her Bliss. 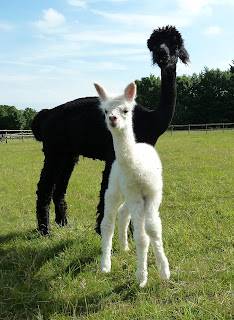 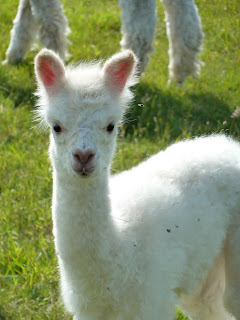 Just as I had finished drying her off and spraying her with iodine I turned to look at the rest of them under the trees and Sabrina was producing something under her tail too!  Now again we had been trying for a grey, Sabrina is a brown roan (colour contaminated brown in other words!) with a white face, her mother is grey and her father brown with the odd white spot here and there, more contamination- so we  used Ardingly, our grey male over her.... he has produced more grey than any other colour...
Imagine my excitement when I saw this!! 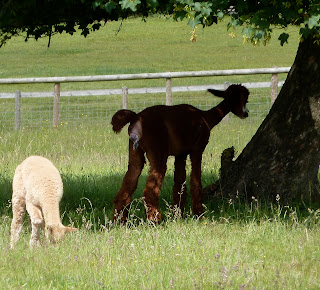 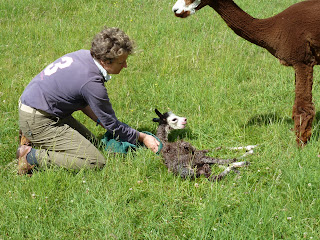 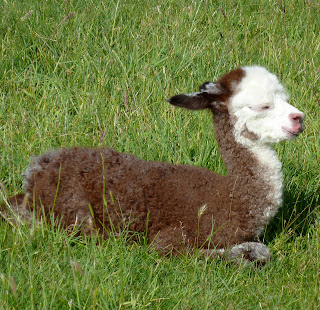 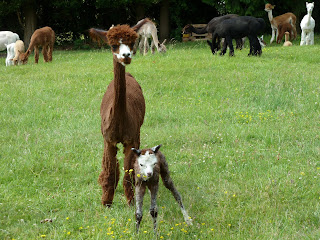 Stunning little boy - very even in colour and very crimpy fleece already... Ardingly has done it again and we will certainly be repeating that mating! We have named him The Sorcerer.
Posted by Karen Oglesby - Meon Valley Alpacas at Tuesday, June 14, 2011

Email ThisBlogThis!Share to TwitterShare to FacebookShare to Pinterest
Labels: Sunshine and a grey day