Another great weekend, lots of excitement, lots of laughs, and lots of rosettes and sashes. It was bitterly cold, and the weather was utterly dreadful but it didn't stop the fun.

I'm thrilled with my little show team of 8, the competition was huge, there were some stunning animals there and at one point, towards the end of there show, we were apparently neck and neck with Bozedown for Best Large Breeder award - not that I, or any one else for that matter, would ever consider us to be a large breeder with just over 50 alpacas!

The Sorcerer won his class and then Reserve Champion Grey Male, Bobby Dazzler and Eros came 4th and 6th in Junior Fawn, Callista 4th (for the 3rd time)  Junior White Female. Westways Testamant, who we part own CME and  Keith Taylor from Watership Alpacas, who was showing most of my entries for me,  came 2nd in Adult White Male.  Bonami our Intermediate Fawn boy won his class and then went on to win Champion Fawn Male, very exciting, and little Bond won Junior White Male again and then took Champion White Male - at that point I had to wipe away a couple of tears of joy!  I just wish I could remember all of the lovely comments the Judge Nick Harrington-Smith made, I know that one of them was "capacity in bucketfuls!"

Email ThisBlogThis!Share to TwitterShare to FacebookShare to Pinterest
Labels: Heart of England Show

We have been scratching around for hay supplies for the last few weeks, most of which has been expensive and not very tasty, according to my fussy four legged friends. I recently bumped into an old neighbour/farmer who farmed the land next door, and made hay for us years ago when we lived in Petersfield, before we had alpacas, when I trained horses for a living. He said he had some hay left over from the 2010 crop which my lot might like as it was still green and 'soft'. Sounds perfect, I thought, so I picked up a bale to try and I was fairly confident by the sweet smell of it in the car as I drove home that they would like it - they loved it.  I talked Peter into coming with me to pick up a trailer full, what swung it was my suggestion of a route via our old local for lunch, he didn't take much persuading...

The Harrow at Steep, is a 'proper' old country pub.. quite well known in these parts for being unchanged for the last 80 years or so, even down to the outside loos, although they have added a heater in recent decades which does it's best to keep the ice from the pipes, despite the draft whistling through the gaps round the door.  Inside the pub there is always a roaring fire going, wild flowers on the tables, country magazines and old books. One bar is for the locals, a bit daunting as they all peer at you when you walk in .. the other more for visitors, like us now.   A toss-up between the legendary pea and ham soup with it's huge hunk of homemade bread and wedge of  butter, or the yummy scotch egg ploughman's ... the egg.. and was of course delicious. The beer was wonderful too, we felt a tad
drowsy afterwards and could quite easily have stayed there in front of the log burner all afternoon, but the hay appointment was calling.

We had to pass All Saint's Church, we got married there nearly 15 years ago. We pulled over to have a quick peak inside, I had forgotten how beautiful and how very old it was, it dates back to the year 1140, can you just imagine what life must have been like then... Our visit brought back lots of happy memories, not least the thunderstorm that raged over our heads on our rehearsal the evening before, which I did wonder at the time was some kind of warning! It's been pretty stormy here today and we've had thunder too ... strange coincidence.

It's an early night for me tonight, I 'm struggling to keep my eyes open, but I need to bring you up to date on what has been a very full week, before I collapse in front of the telly! Here are some pics from the World Alpaca Conference, which was excellent. Firstly what a stunning venue, I felt privileged just to be there, my student room was very large, clean and comfortable - so much better than I had imagined! The whole event was extremely well organised and seemed to run like clockwork, thanks to all the hard work of the organisers. The food was very good, especially given how many people they were catering for, and dining in the Great Hall was a real treat - I almost expected owls to fly over our heads any minute. All the lectures I attended were excellent, I especially enjoyed Dr Andrew Merriwether on Colour Genetics - I could have listened to him for hours, and Val Fullerlove's Historical View was really good,  and Julio Sumar lectures on reproductive pathology and embryo transfer were fascinating - he is a wonderful speaker and such a lovely gentleman to talk to, with a lifetime of knowledge and experience and passion for his subject.  Another highlight was the Fashion Show - those students have real talent and the garments were amazing. We had sponsored one of them, Rebecca Peatie, she introduced bright colours and graffiti with a South American feel in her design, and I was delighted for her when she won the award.

One short evening at home and a quick catch up on the livestock and then it was time to head off for the SWAG Spring Show.  Rebecca came with me this time and we took our little show team of 6 Juniors plus Bonami our intermediate fawn boy who came 4th in his class, Eros 3rd in his fawn class, Callista 4th in her white class, Bond 1st in his white class, (way-hay) and The Sorcerer 1st in his grey class and then he went on to win Champion Grey Male and Best of British Huacaya!! Very thrilled with my little team. We arrived home in the dark at around 9pm and thankfully there was a stable ready for them all and so they were duly stuffed into it for the night. This morning they were back out in the field telling all their friends about their adventures. 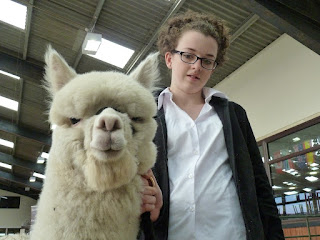 So back on the farm today and I delivered six of our little boys to their lovely new home to live with Beverley, Paul and Jacob an hour down the road in Hampshire. We wish them the best of luck and happiness with their new venture into alpaca ownership. I remember how excited we were to get our first alpacas nearly 14 years ago... 2 pet boys !!!!!

Email ThisBlogThis!Share to TwitterShare to FacebookShare to Pinterest
Labels: A busy week

Our early Summer seems to have left us - we have had all of 3 drops of rain today and clouds - can you believe it?! We are seriously very anxious to get rain, lots and lots of rain - the ground is cracked and the grass not growing - we definitely need lots of the wet stuff.


Recent jobs on the farm have been harrowing, I mean with a tractor pulling chain harrows - not a traumatic experience or anything. We have loads of moss, much more than our fair share - most of it ends up on our show teams fleeces, so they look kind of green in the ring.  We usually follow this with rolling, not literally us, I mean with rollers behind the tractor (well you never know who reads this rubbish do you?) but that wouldn't have much effect at the moment as the ground is like concrete. We should be putting some fertiliser on, but you need rain to wash it in and apart from a few showers forecast today and maybe tomorrow there's not much coming our way, so not done it just yet.


The whole herd had their Spring vaccination at the weekend and we split the females up into 'OK and fatties' and need a bit more grub. They do love a change of field, but hate being split up from their friends - silly billies - spent a good 10 minutes prancing and pronking about and looking for each other, they should know that they get back together again eventually (unless they're sold - but I don't tell them that!).


Every now and then, as I sit here typing away , I jump out of my skin as a CD whizzes into my peripheral vision and crashes against the window - a very effective crow scarer that Peter devised hanging from the gutters, so we could sleep in the early mornings rather than being assaulted by aggressive/amorous big black buggers (crows) banging on our windows.

I'm off to the World Alpaca Conference next week - looking at the itinery there's not much I haven't heard before but with my awful memory it won't matter as it's always good to have everything reviewed numerous times for it to properly sink in - but I am hoping it will be good. I'm staying in the student accommodation which will be the nearest I will have got to being "At University"! Will be good to spend 3 days immersed in everything alpaca with everyone also equally obsessed with alpaca to spend it with.

And a picture from last summer .... look how green everything its...