We had fun at the Bath & West Show, though I have to say that we won't be camping again in a hurry, well not there anyway, so noisy all night with all the quarry lorries thundering up and down the road, and it was very chilly...

Anyway enough moaning, Bonami came 3rd in his class of Junior Fawn Males and Judge Val Fullerlove was very complimentary about his fleece and commended the density and length of it as well as the fineness and structure - so all in all he has had a good show season.  Bonaventure wasn't placed this time, but she behaved beautifully for Rebecca who took her into the ring for her class and for the Junior Handler. Rebecca was a star, she won the older section of Junior Handlers and then after many questions from the Judge about all sorts of Husbandry things such as birthing and cria care she took the Champion Junior Handler too.  I have to say Isla May,  who she was up against did really well too - well done to both of them - alpaca breeders of the future!

Helen did her usual display of ring procedure as an alpaca, led by Rebecca, and even dressed up for it - what a laugh!  Not sure I will ever think of chocolate raisins the same again! 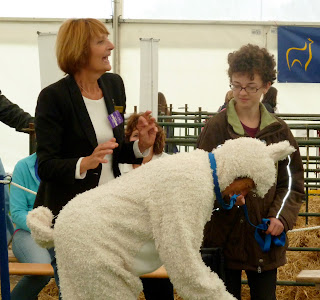 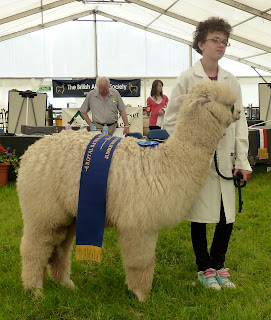 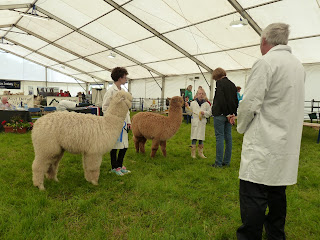 The girls being quizzed on alpaca care and management
Back home now and it's a lovely warm day - little 'Treasure' is doing really well, but needs a playmate, though not today it seems.......
Posted by Karen Oglesby - Meon Valley Alpacas at Thursday, June 02, 2011