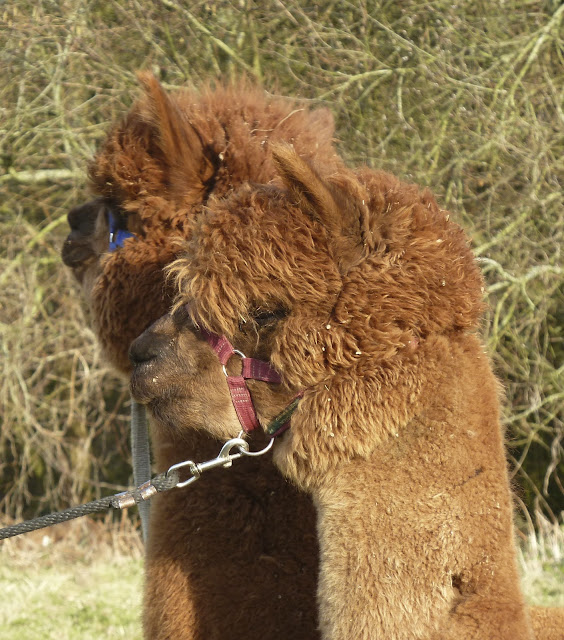 We had great fun yesterday checking out our boys again and having a bit of a photo shoot and celebratory champagne and cake party to welcome them in properly.  They still have their silly lollipop hairdo's, and of course great chunks of fibre missing from all the blood tests needed for export from USA and Canada, they're also amazingly dusty and could do with a good drenching of rain, not that I'm wishing that any time soon, it's currently very sunny, dry and quite Spring like here, so much so our girls have been climbing into the water troughs this morning to cool down! Anyway here are some snaps I took of them - enjoy!

At long last our second group of Snowmass boys have arrived! After a 15 month wait, 6 months of which was the usual quarantine period in Canada, the rest because they got stuck in the States as the Border between the USA and Canada closed just at the wrong time, they are finally here safe and sound, and very impressive they are too!

Nick, John and I arrived at Heathrow just after 10am on Thursday to meet up with Jay and Hilary and Richard, and a film crew from the program Airport Animals, which goes out on Animal Planet, who were going to follow the story of our Alpacas coming into the Country. We elected Nick, who had selected these boys on our behalf, (and who we all know is very good at talking!) to be interviewed on camera by the film crew, which he did admirably, of course, and as it turned out, numerous times throughout the day.

For the rest of us this was to be our first sight of the animals - we had only seen their pedigrees, fibre stats and pictures and of course had Nick's descriptions and recommendations and so there was a certain amount of nervous anticipation all round, which intensified as time went on, and on....and on.

Little did we know how well we would get to know those sofas in The Animal Reception Centre, with many delays, the first of which because some 'Div' (John's word which I like very much, there were other's which I couldn't possibly repeat), taking them in their crate to cargo for 2 hours, but mostly because of some quite unbelievable cock-ups on paper work in Canada, which was apparently sent back to the farm by officials rather than accompanying the animals?!?!?!?

Incidentally, the toilet facilities for the day came as a bit of a shock, one of those metal round things with scary doors which threaten to open leaving one exposed to the whole world when one's knickers are round one's ankles - one desperately needed pee was enough for my nerves, I had to insist on using a proper indoor and secure staff loo for the rest of the day!

After many hours it was agreed by Animal Health that we could at least have a sneaky little look at them before Jay and Hilary had to leave and wow, they did not disappoint! After many frantic phone calls to Canada by Richard our Agent, who incidentally did a sterling job keeping us all calm, resulted in journeys to neighbours for scanning, and emailing and the eventual approval of document copies from Customs and DEFRA. Some nine plus hours later we loaded them up, with TV crew still filming, now in the dark, and drove them away. The planned tea party with all the co-owners had been abandoned hours ago.

Unloaded, we took another little peek at them in the light of Nick's head torch before leaving them in the peace and quiet of their cosy barn. I then completed my own journey home, another hour, tired, hungry and feeling bizarrely car sick from my own driving and fell into bed, exhausted.

Their names for you to get used to -  Snowmass Puna Sky, Snowmass Roll of Honor, Snowmass Golden Legend and Snowmass XXXtreme Dimension - I'm sure you will be hearing a lot about them in the future. 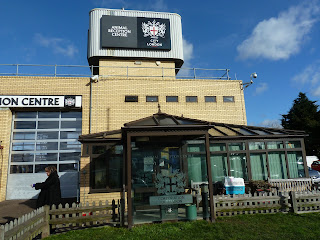 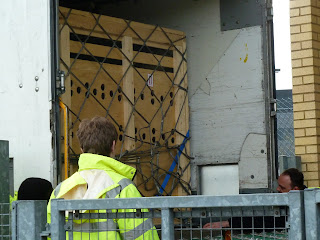 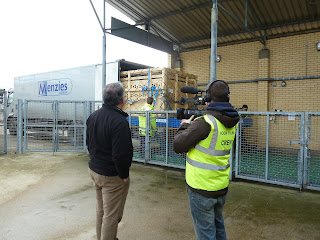 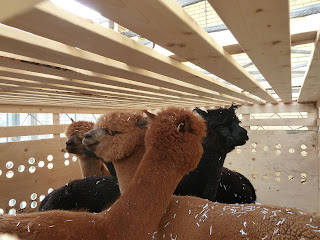 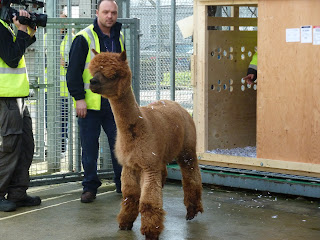 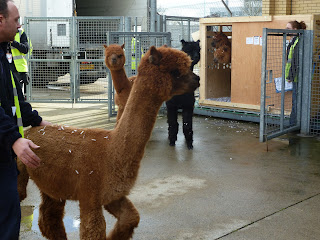 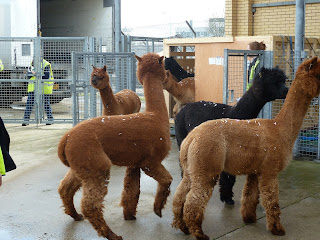 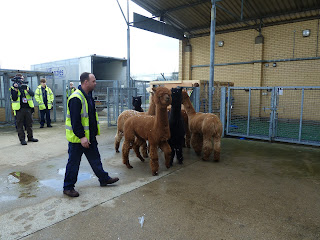 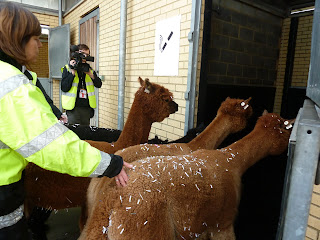 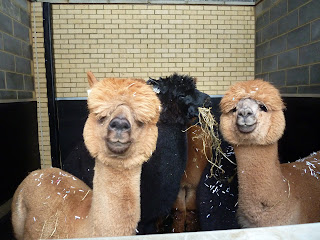 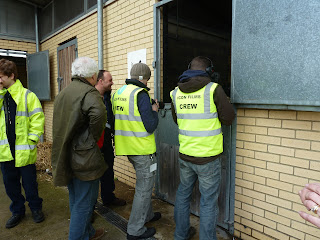 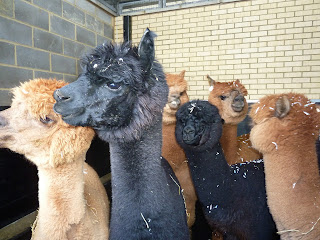 A share in the two blacks we couldn't quite stretch to, but we will almost certainly be taking the odd service to them here and there!  Roll on Summer!
Posted by Karen Oglesby - Meon Valley Alpacas at Sunday, February 17, 2013 5 comments:

Yes the sunshine makes my headlines! I'm rather obsessed by the weather, probably because for so much of my life I have had to be out in it.

With my car, a trusty and very grubby Kia Sorento in the village garage being MOT'd and having a long awaited service, I'm ashamed to admit the last one was back in November 201, well she was running OK do they really need all this servicing?  Anyway, unable to go out food shopping, very dull (I'm equally as bad at domestic chores as I am cars) I got on with a bit of halter training - much more my thing! Concentrating on the boys and three in particular who objected strongly to the whole idea the last time I had a go with them.

Last time Agent, who looks like butter wouldn't melt in his mouth, protested violently, shouting and carrying on and as a final protest flopping down on the ground and refusing to move!  Today, after a few words in his ear and stroking his head until he stopped shouting, he was persuaded to walk across the field to the woods, through the trees, over a log and back again. I wouldn't go so far as to say he enjoyed it but if he could talk I think he would have to admit that he felt a little foolish making such a fuss!


Next was Touchwood, not as hysterical but stubbornly awkward about the whole thing and in push- me-pull-you-fashion we gradually made our way to the woods, up the path and then he walked beautifully back beside me.

Then Bamboozle, who just didn't get it, so we followed everyone else about in the field together and after just a few minutes he was walking quietly beside me where I wanted to take him.

I'm awarding myself a gold star for getting all the microchips and registrations done today.  It's been tricky finding a dry day with the help available but today it all came together.

Sheltered from the bitterly cold Northeasterly wind and in the sunshine we organised the 21 weanlings so that they came into the pen 3 at a time. Because of my dodgy back I had to kneel on one knee to put the chips in, plus it makes it much easier to get the angle of the needle right. Lucy was holding them still and Rebecca was in charge of recording the numbers and working the gates. Thankfully it all worked like clockwork and didn't take long at all.

For those of you who haven't come across microchips before they are about the size of a grain of rice and they are implanted under the skin just below the left ear using a scarily large needle. Each has a unique number and can be read with a scanner to verify the identity of the animal against their registration document on the British Alpaca Society register.  This doesn't seem to hurt them, though it took me a while to pluck up the courage to do it when we first started breeding, and I still dislike doing the first one of the season.

Having implanted the chips they have to be read with a scanner to make sure they tally with the numbers on the label and that they are actually in the animal and not still in the syringe or needle.

Later on today the numbers were recorded, along with their names, parentage, colour, sex and DOB onto the BAS Registry - much easier now that we can do this electronically. I also keep my own records of all that on a simple spreadsheet and on a herd software program.

One little chap had to have a name change, as he didn't quite live up to "Brilliance" after all and is now "Bono".  Had to begin with a B - I was tempted with Bloody Disappointing!

Anyway, job done and now I can get on with entering some for the shows... that's if I can make up my mind who's good enough, they seem to change as often as the weather.