ONE OUT AND ONE IN

A couple of years ago we found a lovely home for two of our retired stud boys, Grayling and Ocho, just up the road in the next village with Liz and Gus.  They are extremely well cared for and loved and so I was really pleased when they decided to take Sir G under their wing as another retiree,  the three amigos seem very well settled and it's rather nice to be able to see them every now and then when I drive past their field. Thank you Liz and Gus!


This summer I decided to retire some of our older females too. I'm quite happy to keep them here but realistically we should move them on as field pets to make room for the next generations, and the occasional auction acquisition..... Yes, we went to the Alpaca Classic last weekend and had a very good day. This event was really well organised, with great speakers and beautiful animals and one of them  - Bozedown Jumper is now in our field. Well you only live once...


Today we brought the cria group in for their weekly inspections. Lots of smelly lotions and potions to combat harvest mites and midges. I'm trying out 3 different things and I'm not sure which is working the best but something is as they're definitely better than last week.

One of our older girls Akela is a very spitty madam when pregnant but when she's open,  as she is now she's very cuddly - as you can see in the picture of Rebecca with her and others wanting to join in. 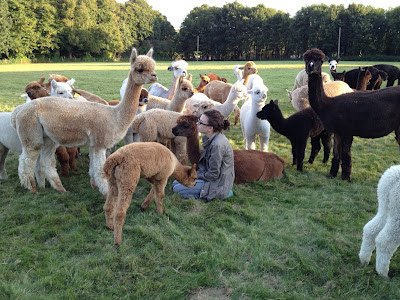 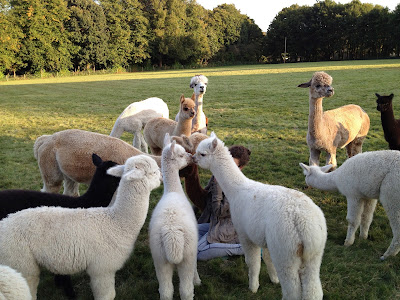 Another job today was to put the boys into a different field. Loads of grass - they are very happy. 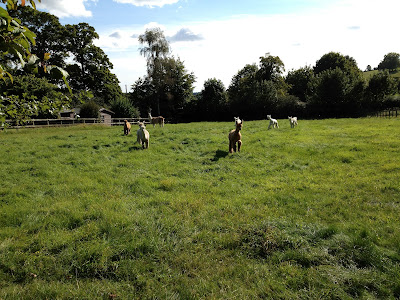 I woke early this morning and thought about yesterdays show - all in all it was a very successful day and I really enjoyed it.  It started very early, as it did for a lot of the competitors. It was chilly too at 6.5 degrees at 5am, the sky a clear black with a mass of stars. The journey was easy with hardly any traffic and light when we arrived.

From an organisers point of view the first part of the day was the trickiest.  Our unloading area happened to also be the main thoroughfare for Trade 2 traffic and at one point we had a bit of road rage going on as we had about 6 trailors parked up unloading and queues both sides of very impatient Trade 2 traffic - some actually driving between exhibitors with animals - not ideal and that will be changed next year.  Everyone in and our Judge Liz Barlow arrived, our PA System hadn't. We were due to start in 20 minutes.  More frantic calls and my version of running halfway across the show ground to the main PA Tower where I staggered breathless and begged for our system to be delivered.

Judging underway and I was first in the ring with The Sorcerer, our grey Intermediate. Crikey it was already quite hot - this day was going to be a scorcher. Somewhere in the background I was aware of someone putting up loud speakers - thank goodness.  Another mental note for next years double-checklist.   We were awarded a second, shame we like the red ones much better!

The sun just got hotter and hotter, and the crowds bigger and bigger - we attracted a constant crowd around our ring, unfortunately there just wasn't time to open up our tent officially to the public as we had the Junior Handler classes going on in our short break for lunch, which incidentally co-incided with a very noisy band of spidermen - the kids did well to hang on to their animals. We had opened the sides up so people could wander round and see all the animals.  Quite a few of the public snuck in though, despite penning them out for their safety - one even ended up wandering into the ring apparently!

The rest of our show team did well - Eros 3rd and BobbyDazzler 4th in the Intermediate Fawn Male, then Bonami won his Adult fawn male class and then went on to win Champion Fawn Male - his third this year, so I was happy. Our 3 Invincibly Elite xx intermediate white boys came 4th, 5th and 6th.

The Alpaca Stud deservedly won both both Supremes - their amazing grey Nyetimber, who looked just stunning and who our grey Ardingly always came second to when shown,  taking the Huacaya - many congratulations!

My thanks as joint organiser go firstly to Nikki who did most of the pre show stuff this year and then to our team of volunteers - Cathy and Graham, Lisa and Ray and Keith and Allison and then John on commentary, Jay and Gary and others and, of course our Judge Liz Barlow you made it a great show. Oh and thank you to all those exhibitors who came and supported us and very kindly stacked your penning away for us, it made such a difference.

Not many pics as only had phone camera... and I kept forgetting to take any!

A really quick note just to say that I hope to see lots of you tomorrow at Romsey - we're all ready (I think) and team Meon Valley are in the yard handy for a 5.30 am load up ... I probably won't sleep tonight, never do when I know I have to get up early. The forecast is great, warm and sunny - we have a bigger marquis and show ring than last year with more entries, around 130, so our Judge Liz Barlow is going to have a busy day.  The public can wander through the marquis during our lunch break - do come and say hello!


Being one of the organisers I have had a peek at the schedule - our grey The Sorcerer is first in the ring!  He's looking good - I hope the Judge agrees!
Posted by Karen Oglesby - Meon Valley Alpacas at Friday, September 07, 2012 1 comment: