Yesterday we had all our girls scanned - very pleased we have 24 pregnant. Only 4 were empty and I'm not surprised as I had guessed as much even though we hadn't done any spit offs lately. If you know your girls you can tell often by how they react when you handle them, but it's always good to have them scanned anyway, just to be certain.  We'll repeat the scanning again in March just to make sure they've all held through the winter.

Not much else to report, all very quiet on the farm and making the most of it!
Posted by Karen Oglesby - Meon Valley Alpacas at Wednesday, October 26, 2011 No comments:

Moved the females and crias into the next field, which of course was cause of much charging and prancing about.  Of course by the time I got the camera everyone had calmed down... anyway here are some pics taken from the last couple of days.

I've started the autumn clear up in the garden, a bit early probably, but I'm in the mood - I tend to get a bit scissor happy with the slash back and a light prune on a shrub can sometimes reduce it to a stump ...  but so far I have managed to restrain myself, even so, the bonfire heap is growing nicely ready for Nov 5th.  We have a huge paca-poo pile in the woods, thanks to Peter and his poo-hoovering,  the 2 year old stuff is looking wonderful, just have to work out how I'm going to get it to the garden without having to use the wheelbarrow numerous times. I would love a mini digger all of my own to play with - would be so much fun, and one of those machines that chop up bits of wood into chips..... highly unlikely that I would be allowed!

The mornings have suddenly become quite chilly and we had a light frost today .... I am definitely an Autumn person ... 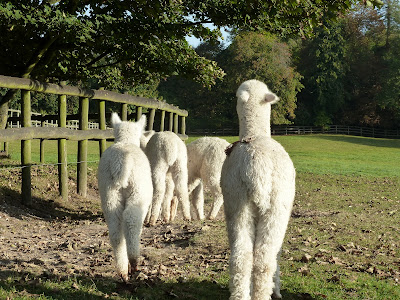 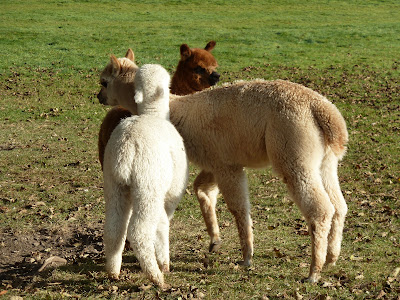 Email ThisBlogThis!Share to TwitterShare to FacebookShare to Pinterest
Labels: CHANGES

Us 'Girls' were working well together this morning - with Rebecca and Lucy's help all the females and crias were weighed and wormed with Cydectin in a jiffy. All pacas co-operated beautifully, having gone straight through the race over the scales a couple of times to learn the route, they were then very calm when it was their turn to be stopped and weighed. This is where our round yard comes in so handy.  Shame no-one took pictures of the proceedings but we didn't think about it at the time. Along with condition scores its interesting to see how they change over the year and always handy to have weights to give accurate dosing, adults varying from 50 to 83 kilos and big Miel at 101.3.  I like to see if I can estimate the weights. I couldn't decide which field to put them in, so in the end they went back into the same one .. supposed to be a good strategy for reducing resistance in worms to drugs anyway.

Rebecca and I then went off to an auction and with her encouragement (didn't take much)  bought a couple of treasures and a rather nice teak table and chairs -  bargains - I love auctions!
Posted by Karen Oglesby - Meon Valley Alpacas at Saturday, October 15, 2011 No comments:

Not blogged for ages, been really busy doing 'stuff' and most of it only interesting to me.... Fantastic autumn so far, the grass is still growing and the fields look great. The girls are still munching their way through our biggest field and look lovely against the autumn trees. The big boys are now in the same field with Bonami and Wizard, the 2 intermediates with their friend Yerba, the llama to look after them and stop any bullying.

Last weekend we weighed and dosed all the cria with Baycox as a precaution, and they had their first AD&E and this weekend the plan is to worm everyone and do any toenails that are looking untidy. I may decide to wean a few of the older crias soon, some are huge even though they're only 4/5 months old. Bliss and Bruno, the bottles, are doing well, gaining weight at the same rate as the others, but not ready to wean yet.

Medina had a bout of colic during the week, probably a bit bunged up I think, she was down, obviously in pain and not wanting to get up or eat, but chewing the cud a bit, always a good sign. Her poo was hard and a bit dry but everything else about her seemed ok - eyes, membranes, temp etc... so  I gave her some Metacam and a large dose of liquid paraffin and some vetrumex and by the afternoon she seemed a lot better. Today she is back to normal, thankfully.

Also this week one of the cria gave me cause for concern as he lay seemingly at deaths door and didn't stir even when I lifted his head off the ground. Checked him all over, looked in his mouth, opened one eye, then the other - then he woke up! I don't know who was more surprised, me or him, obviously a very sound sleeper!