Hurray, yippee.... we have a Snowmass cria - a white Quetzalcoatl female, out of Calico and I am thrilled with her! She is so soft and dense and you can already see that she's going to have a fabulous fleece.... born just one day short of 11 months she's a 10 kg, strong and lively person with slightly wobbly legs... but they'll soon strengthen up and then she'll be racing about the field with her playmate.  We have called her Calister.  She has a coat on because the forecast was heavy rain .... (some hope) .. 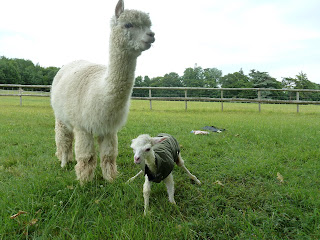 On the down side Toffee Apple isn't being a particularly good mum for some reason, not allowing her cria to have full feeds..  and although little Treasure is still lively, she isn't gaining weight, in fact she had lost some today, so we have taken them in for the night hoping this will concentrate her mind on being a more caring mum (usually works). It does go to show how important weighing regularly is especially in the first week. However, although she doesn't want to feed her properly she is devilishly protective and in the process of getting them in, weighing the cria and then settling them in for the night she screamed the place down and spat for England! Once covered I just had to carry on until the job was done ... then all the clothes went straight in the washing machine and I went straight in the shower.... yuck! No pictures of that!!  Can't say I'm looking forward to handling them tomorrow - will have to plan ahead and make a spit mask for her tonight out of one of Peter's old socks!
Posted by Karen Oglesby - Meon Valley Alpacas at Sunday, June 05, 2011