I looked out of the bedroom window this morning just before 7am to see Toffee Apple (345 days) obviously in 1st stage labour by the way she was lying .... here we go then.  Got on with my chores and fed everyone and just kept an eye on her.  By 9.30 she was beginning to push so wandered a bit nearer with my camera and birthing box to watch from a discreet distance.  All was well and feet and legs emerged quick quickly, I managed to take a bit of video and a couple of pictures, handy for the courses. She got to her feet and said hello to the cria and then lay back down and pushed the rest out so quickly that I had to abandon the camera and go to the aid of the cria who was being turned into a walnut whip under her tail, if you know what I mean - kind of all crunched up and in danger of suffocating!

Anyway, all was well and I carried the cria into the sunshine and away from the fence ... very happy to see we had a female, from Tulaco Centurion - a little cracker .. weighed in at 8.5 kg.

Up and feeding within a couple of hours, by this time with a cria coat on as although by now she was dry there was a very keen wind and it was threatening to rain and she was shivering a bit..  She's so cute and I always forget how tiny and scrawny they look when wet...  We have called her Treasure.

Must get busy now to make ready for the Royal Bath & West Show, we're camping (must be bonkers) and going down later this afternoon. Taking Bonami and Bonaventure who were both wet and covered in mud this morning after the showers yesterday.

Peter could be busy there's another 6 due any time now..... 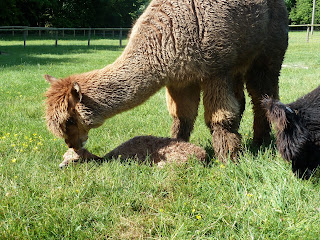 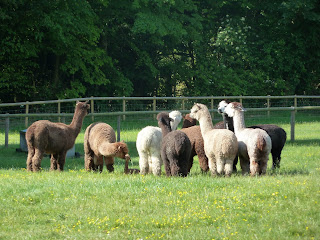 Posted by Karen Oglesby - Meon Valley Alpacas at Tuesday, May 31, 2011