Yesterday my girls helped me do a little gardening. What's the point of getting the mower out on the driveway if I have a little gang of willing helpers happy to do their bit! They had a lovely time and all was quiet for half an hour or so and I quietly pruned a few rose bushes whilst keeping an eye on them.

Then fuelled by full tummies, a little spring sunshine and a strong wind under their tails they started to get up to mischief! Whilst my back was turned they snuck under the rope which was meant to stop them going up the top of the drive, and then they pronked around the cars and apple trees, leaping with joy off the bank, with me in tow trying to herd them back down to the bottom. Ha - some chance, alpacas know how to have a laugh. OK stay there then!

After another half hour or so, having had their fill of grass and fun, they happily moved back down into their field when I called them and made straight for the poo piles! The grass was mowed, the roses pruned, though not quite as evenly as I had hoped, but the poor forsythia had taken a bit of a bashing, especially from Bettina! 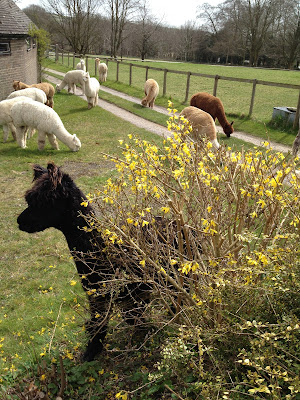 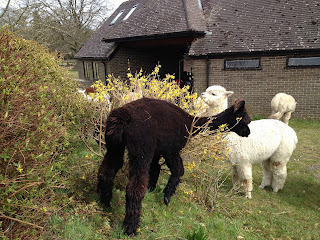