I managed to get nearly all the poo on the place hoovered up this morning before the rain set in, whilst Peter topped the front field. The rain hasn't stopped since about 12.30 and no-one else wanted to go anywhere, so I set about tidying up the spare room (must be a blue moon or something) and swapping the winter clothes over to summer, not sure why when it feels like March out there, but seemed like a good idea at the time - nesting maybe?

As is my habit at this time of year I was also keeping an eye on the due females, who this morning were all just getting on with the important job of eating. By about 3 pm Calico had wandered off on her own a bit for a lie down under the holly tree, being sensible and seeking shelter from the rain. She was still there an hour later and then the next time I looked out 10 minutes after that she was doing the 'labour shuffle' ... walking round in circles and straddling in a very uncomfortable way.  Here we go then, that has put pay the spare room clear out, though I had almost finished. I did wonder if she was going to have problems as it was so late in the day, but she seemed quite calm about the whole thing so I didn't interfere and Rebecca and I watched from the spare room window, now that we could get to it!

By 4.15 we had a head and legs and maybe ten minutes later a cria, in the exact spot she had last years, white and female, so a very good start to our season. Still raining, "Crystal Clear", unlike the sky, has a little coat on and will spend the night in a stable once she has learnt where the milk bar is ... can't be doing with all that wall sucking! 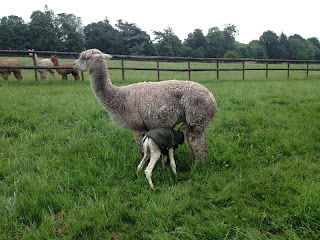 Email ThisBlogThis!Share to TwitterShare to FacebookShare to Pinterest
Labels: It's Crystal Clear