Last night we saw Take That at Wembley and I'm so pleased I got us last those last minute tickets, we had a brilliant time!

We got there hours too early, mainly because I don't know my way around the Big City only going there on average once a year and feel I need plenty of time to negotiate the tubes and stuff, for a moment we couldn't even get through the turnstiles because we were trying to go through the 'out' rather than the 'in' - Country Bumpkins -we had to laugh at ourselves! We people watched for ages before we found our seats from where we witnessed the stadium , which is absolutely ginormous, gradually fill up with over 85,000 fans, like a lot of little ants round sugar.

Even though we were up in the gods at the opposite end to the stage we could just about make out who was on stage and the screens gave us close ups anyway. We looked down on a sea of glowing mobile phones, a definite sign of the times and millions of pale arms all waving and clapping in unison, including ours of course. The atmosphere was fantastic and the 'five' were on great form, giving us the old favourites from 20 years ago as well as recent stuff. Robbie Williams inevitably stole the thunder (with not as much foul language as I thought there was going to be thankfully),  he certainly took command of the stage, it was a great show.

After a very rushed and quite long walk back to Wembley Central, we were herded gently by police onto the jam packed hot, stuffy tube and just caught the last train home with minutes to spare. Having stopped at every station between Waterloo and Petersfield, we finally drove the last 20 minutes home and crept into the house at 1.45 this morning.

Feeling just a little tired, I have pottered about on the farm,  I have seen all of 5 people, Peter, Rebecca,  1 visitor, and 2 in the distance.  I quietly went about weighing crias, Bliss is seemingly back to normal now and has even gained weight despite her ordeal. I started our breedings off for the year with Ardingly and Sabrina and Goldrush with Moya,  and then I just enjoyed the peace and quiet - lovely. 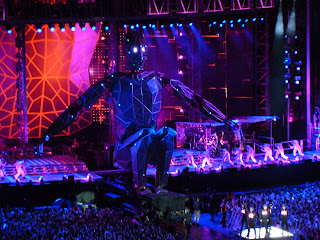 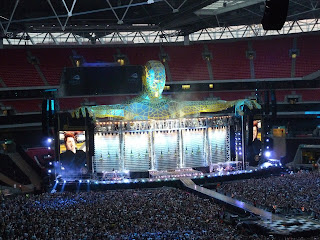 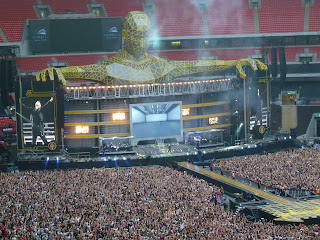 Email ThisBlogThis!Share to TwitterShare to FacebookShare to Pinterest
Labels: Take That