I'm totally knackered today as I've overdone it with the jungle bashing ... so I am really rather relieved to have a wet day to take a break from it and rest my poor bruised hands and aching shoulders. Our boundary is mostly a strip of woodland, nearly all deciduous stuff, some really lovely specimen trees such as cedar and scots pine, some beautiful old beech, horse chestnut, both white and my favourite pink ones, limes, cherry, elder, field maple and sycamour and something called a wayfarers tree which is evergreen, plus a few mystery ones which I haven't identified yet. 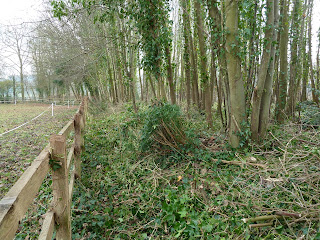 Last winter we cleared the ivy and thinned out the small stuff along the North side. For the last couple of weeks we've been clearing the ivy and thinning the woods on the East and South sides.  It's really hard work, great on a cold day, and I have to say hugely satisfying seeing the result of our efforts. It's fun discovering bits of our land for the first time! 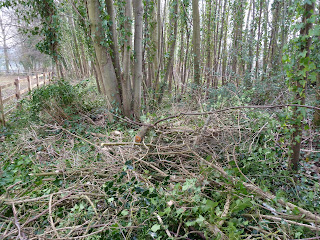 Ivy, bramble and saplings have done their own thing for decades and so we are now doing battle to try and get it all under control before we are taken over like Sleeping Beauties castle.  Peter does the big stuff with the chainsaw and I hack wildly at everything else with my machete thing, loppers and handsaw. I'm a bit of an expert now at chopping down saplings with my machete - it's just a matter of bending them and slashing through the bend, cuts through like butter if you get it just right, very satisfying. Not so good is the way stuff flicks back and whips you round the face or legs, and yesterday I suffered the indignity of falling over backwards when something stubborn suddenly gave way, I don't thin anyone saw me fortunately. 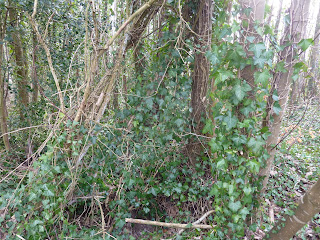 We had an Arborist come and survey the trees, sadly our biggest and most beautiful beech has to be felled urgently as it's diseased, apparently could come down anytime and is close to a road.  Monday is the scheduled day for the tree surgeons to take it down, I'll miss all the excitement as I'm studying paca poo under microscopes all day .... shame, I really wanted to be there and I was hoping to get them to take pictures of our farm from the top of the tree before they cut it down as it looks out over all of it. At least we'll have plenty of firewood for a few years.
Posted by Karen Oglesby - Meon Valley Alpacas at Wednesday, January 18, 2012