Spring in the air 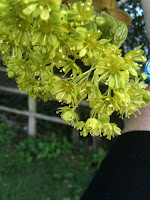 Glorious weather - 21 degrees and wall to wall sunshine for last couple of days... pacas are feeling it, they're climbing into the water troughs for a cool down.... I gave the girls a new field today ... they went bonkers, charging about and rubbing themselves on the holly bush, and jumping for joy .... I dashed in to get my camera, but the battery was flat.
The swallows are back so its officially Spring. All the daffodils we planted down the drive have come up, so that was well worth the effort .
Thought I'd get Boris the Morris out for a drive, poor chap's been in his garage all winter. Covered in paw prints - how did a cat get even get in there? We always have to jump start him the first time and then he's fine all summer, but today he was stubborn, apparently something to do with the starter motor thingy .. Peter said he'd fix it for me. I have to say poor Boris is in a rather sorry state, I think he's now beyond shabby chic and just plain shabby!
Off to the Spring show this weekend, not sure how many I'll take but Bonaventure and Bonami, who are now both covered in moss will be going and probably another couple to keep them company.
By the way - does anyone know what this tree is - really pretty blossom ?
Posted by Karen Oglesby - Meon Valley Alpacas at Thursday, April 07, 2011

Email ThisBlogThis!Share to TwitterShare to FacebookShare to Pinterest
Labels: Spring in the air