When I awoke this morning I remembered I was going to have my wisdom tooth out ... my stomach churned with massive butterflies, but I knew I had to go through with it... even though it didn't hurt at all anymore, thanks to the antibiotics....

I got on with the daily chores and was busy in the birthing field and noticed that Dove and Yasmina were both looking a bit iffy. By the time an hour had gone by Yasmina was looking her normal self and it was very clear that Dove was in labour. Another hour passed and things weren't progressing. It was early on to worry, but just something about the look of her and the fact that she wasn't looking quite right under her tail, not bulgy or pointy, led me to suspect something was not quite as it should be.

I got my lovely friend and fellow alpaca breeder Donna from Poppydown Farm (to give her a plug - great turkeys and sausages - check out her website!)  just up the road to come and help me catch and hold her whilst I had a poke about inside ...   I couldn't feel a cria at all, she was fully dilated and I could feel a twisty bit - so I suspected a torsion. Time to call a vet.

The Vet arrived after 30 minutes or so and got stuck straight in - up to the elbow whilst I cuddled Dove's head, she was so sweet and never murmured or tried to struggle throughout the next 8 or so minutes (we know 'cos Donna filmed the whole thing) it took to un-twist the partial torsion, reposition the upside-down cria (thats why I couldn't feel it!)  and bring him into the world. Thank you Vet Martin!  After a bit of hanging upside down and vigorous rubbing with a towel he looked fine and Dove seemed very relieved.

It had certainly taken my mind off going to the Dentist, but having said goodbye to everyone and made sure that Dove was OK and her cria, who we have called "Topsey Turvey" was feeding OK .. off I went.

My timing was too good, had I been just a few minutes later I wouldn't have managed to park in time for the Dentist as there was a steam engine blocking the road! OK so it's New Alresford, that's to be expected with the Watercress Line in the town I suppose.

Anyway - tooth out now - so I am less wise that I used to be? 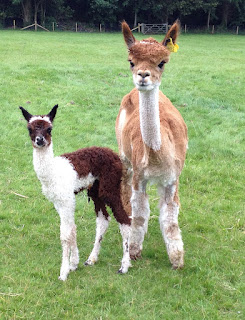 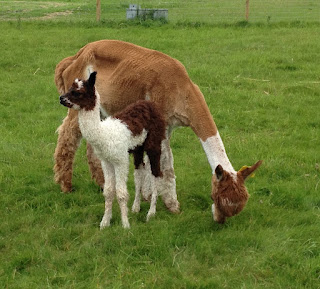