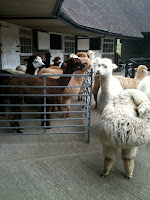 Busy day yesterday, what with Marmade cat to the Vet for castration, then getting all the girls in for scanning with Alan. All pacas lovely and dry as we still hadn't any rain at that point, always a bonus when holding them for scans, but by the time he arrived it had started.... Anyway, great news all the ones he scanned pregnant in the Autumn still are, and of the two he thought were reabsorbing back then, one is definately pregnant afterall - Orchid, who is Sir G's mum, who we haven't had a cria from for 3 years, so really happy with that, and Medina possibly, but not definately ... she is spitting off so hopefully its a yes, and not a retained CL, and she too has lovely cria and both were put to Incan King.... fingers crossed then for 19 crias - starting with Orchid and Toffee Apple, who is pregnant to CME Tulaco Centurion both due end of May. Rain then got a bit serious, which was great as it watered all the fertiliser in - the fields have changed colour already.. whilst moving whole load of 8' feed troughs on a wheelbarrow, 3 at a time, the wind caught the gate I was going through and they all fell off on to my foot, much swearing! Peter took Jerry cat for his little op this morning - apparently he was a little reluctant - literally climbing the walls - should be fun when they come to find a vein!!
Posted by Karen Oglesby - Meon Valley Alpacas at Thursday, March 31, 2011

Email ThisBlogThis!Share to TwitterShare to FacebookShare to Pinterest
Labels: Scanning and cats